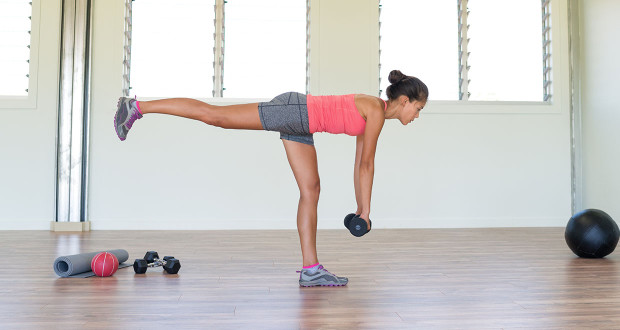 At home, it’s hard to give the right load on your back. An alternative to deadlift – an effective exercise for the back muscles – is the thrust of the king, which can be performed at home. The advantage of the exercise is also that it is performed on one leg, allowing the thigh extensors to learn to work in an asynchronous mode. And this develops not only strength, but also coordination of movements. Exercise thrust king is considered heavy both in technique and in performance. There is another name for it – a dead royal thrust. Therefore, at the beginning of the development of technology, its implementation is possible both with the support of the second leg, and without additional burdening.
Content of the article:

The thrust of the king is an excellent exercise for the muscles of the buttocks and legs with the weight of your own body. During the work the following muscles will be involved:

It’s about working with your own weight. When the element with burdening is performed, the two-headed flexors of the arm and the inner fascicle of the wrist muscles begin to work.

In addition to the fact that the element perfectly works back, it has the following advantages:

Exercise is available to both professional athletes engaged in cross-fencing, and fragile girls. In addition, it allows you to restore balance in muscle stabilizers, located around the knees.

As for contraindications, they are not, if it concerns an element without weight. Working with the weight you need to pay attention to sensations in the back. If there are pains or a dorsal corset is poorly developed, then it is better to wait with training. The same applies to the knees and ankles: you need to carefully perform the element in case of problems with them.

The technique of carrying out the thrust of the king in its classical version will be as follows:

Step 1. We take the original position – we become even, leaving a natural deflection in the lower back.

Step 2. We set one leg back and rest it with the toe on the floor. Weight is then transferred to the other leg.

Step 3. We bend both legs in the lap, sitting down on the front as low as possible.

Step 5. We return to the starting position.

The main thing in technology is a simultaneous squat and a leaning forward. We need to do it a number of times and repeat the complex to the other leg.

The thrust of King is available not only in the classical version, but in various variations.

Thrust of King with dumbbells

Execution of an element with burdening is a complicated version of the exercise. The technique of execution will be similar to the classical version. The only difference is that we will hold dumbbells in our hands. The hind leg at the same time will play the role of a counterweight: during the execution of the element it must be strongly set back – it will help coordinate the ascent.

Thrust with a deep slope

Performing an element without weight, you can strengthen the effect, trying to tilt your palms to the floor. As a result, the amplitude of motion increases, which will allow:

Romanian traction on a straight leg

Replace the thrust of King can be such a training element, which is easier to perform and prepare for mastering the main element. The technique of execution will be as follows:

Lunge back with a towel

Another change in the thrust of King, allowing to work the lower phase of the squat. The step-by-step element would look like this:

All the important points to look at are presented in the table:

The thrust of King is an excellent exercise for the development of the muscles of the back. Techniques can be learned at home and in the shortest possible time. The element will be an excellent addition to exercises such as push-ups, pull-ups and squats.