Half a year ago, realizing all the criticality of not having any physical form at all, he decided to shake the fat off his stomach and sides, tighten his muscles and become a little prettier, so as not to conceal, to gain some popularity among women. Since my willpower was at about zero, and the previous independent attempts to pump up (wringing and squeezing the press) did not bring success, I decided to sign up for a gym. Being a little homebody basket, I decided that it would be nice to be like group classes, at least I will talk to someone.

First of all, I got acquainted with the list of group sections that the club provides. My subscription included incomprehensible exercises on the TRX loops (in fact, this is not bad, but I did not go), there was a metabolism pump (went off once, a very energy-intensive thing and the muscles burn on it) and Resistance training. In the last two I did not go to the end for the reason that there were only girls there. I was not clever and I was shy. In the once-long list, there was only one crossfit.

My story about the crossfit and can be just interesting because, because of its stupidity, it got completely physically completely unprepared for it. With the growth of 182 cm, I weighed 87 kg and it was mostly fat. He came to the section, said he wanted to study, paid extra to the cashier and started going to school three times a week. 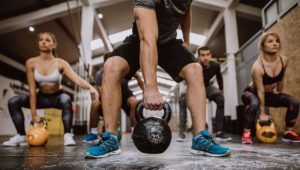 I would not say that it was very hard. No one gave me such complexes, which are called WODs and placed in crossfit groups, and even now we don’t make them either. The coach himself made up the complexes for me, which, in essence, were circular exercises from squats with weights and attacks, push-ups, many variations of the press, hops, burpi, rowing and swinging weights. Another threw the ball into the wall. These are all exercises that I did during the first month. Then they were added to the deadlift and squatting with a barbell. Doing hyperextension every workout. Somewhere after two months of training, movements from the TA were added: lifting the barbell on the chest, frontal squat, bench push, jerk and push the barbell. I, myself, began to run. Now the training consists of a superset in which we work with a barbell and then already, a complex for cardio and strength endurance with small weights.

About loads and sores

to be honest, at the time of the start of classes I was not the healthiest person. I had flat feet (on each of the legs it was different), legs of different lengths (0.7 mm), right chest and left lumbar S-shaped scoliosis (about 10-11 degrees). There was a visually noticeable (without clothes) rib hump, due to the fact that the pelvis and chest were skewed. One shoulder was higher than the other, I was a little limp on one leg. Often she suffered from thoracic neuralgia (sharp stabbing pains in the chest). There was a protrusion in the lower back. Just in case, I decided not to talk about this to the coach, so that they would not look at me as if they were crippling. As they say, the humpback grave will fix it.

But it is worth noting that during all the training I have never complained of pain in my back or anywhere else. Not for the reason that I did not complain, but for the reason that nothing hurt. I even stopped bothering neuralgia. My heart was healthy, so the more problems should not have arisen with it. I can say that I felt healthier and even almost completely removed all visual defects, although earlier, all the massages and corsets prescribed by doctors did not bring any effect. For 5 months of training, there were two small injuries and I got them not on a crossfit. I got the first one when I was working with kettlebells – I pulled my shoulder a little. The second – pulled the inner surface of the thigh – when he sat on the splits. That’s all. But sports can not do without injury.

About heart and stamina

on forums and on social networks it was frightening that enormous loads are being given on crossfit and I will bend over from a heart attack. Considering my initial endurance (it’s a joke, I couldn’t even run 100 meters on the track) and good luck, I had to become the very person who had to bend from him. But I was lucky. For 5 months of classes, I have pumped up my endurance well. It is so good that I even managed to circumvent the guys who walked for 3-4 months longer than me. Now I practice 4 times a week for 2.5-3 hours. Of these, 40 minutes goes for a warm-up and hitch, stretching. Another hour is the crossfit training itself and after it, I still do an hour on my own using the usual Kachkov scheme or with weights. No recovery pauses and breaks in the training process did not do during this time.

Generally, if you practice hard and regularly, endurance increases quite quickly. Normal WODs, I certainly do not, on the advice of the coach. The main reason for which I included an extra hour of training is that I just stopped getting tired of the hour initially allotted for training, and in order to do the second hour, I had to assemble a group. But, since, except for me, no one else stands this, he decided not to insist)

Why is crossfit still needed ?

The question is very good and the answer to it is simple: by and large, crossfit is not needed. There is no unique benefit from him that you cannot get by simply alternating strength and cardio training. In fact, the only characteristic that can only be pumped on a crossfit is strength endurance. Ordinary office clerk, and a hard worker from the factory, such strength endurance, in general, is not needed. You simply can not apply it anywhere, except for the zombie apocalypse and the third world. For a professional athlete, such endurance will be too “unspecific” and it will not give any tangible benefits, only by stealing time and effort from the main training process.

But the crossfit has its advantages

First, it is competitive and positive. Frankly, when I went to the gym, I was in some kind of depression. But as you see your progress, as endorphins are produced under load, you yourself become better. You strive to catch up with those who are better than you. Quickly becoming addicted to physical exertion. Secondly, it is a variety. If you do not plan to engage in one thing in life, then crossfit will help you to do everything a little bit. Here and weightlifting, and powerlifting, and weight-lifting, and gymnastics, and much more. Then you can already choose what you liked more and do just that.

Intermediate results of all

I can absolutely say that I have achieved all the goals that I originally set. First, I lost all my excess weight. Now I weigh 82 kg with a growth of 182 cm, of which: 14% is fat (it was 35%), 70% was muscle (it was 50%). In volume, these are two absolute differences. Arnie, of course, I did not, but now I have a slim figure, I completely removed my stomach and regained my waist. Muscles, of course, do not pump yourself on the crossfire, therefore, I will now think what to do with it and how.

Secondly, the crossfit session had some interesting implications

This may include the fact that my muscles stopped hurting after training. Perhaps the fact is that they are accustomed to chaotic loads. In any case, I do not suffer from pretension, no matter what perversions I use in the training process. Another plus, the muscles are practically not acidified under load. Whatever I do, this “miraculous” burning in the muscles simply does not occur. Recently, a crossfiter girl from Moscow came to us, practicing according to the classical ribock schemes. We practiced together, made Fran complex for a while (100 trusters with a rod + every new minute for 5 berpis). As a result, recruited 100 Tresters and 70-90 bepery. All this is done almost without interruption. She managed in 13 minutes, I in 14 minutes. After that we did 100 bar lifts on the chest (35 for her and 50 kg for me) and ran a couple of kilometers.

The next day, there were front squats for maximum and complex. Honestly, during these two days of training I did not feel any tiredness or pain in the muscles. Thirdly, you become very resilient and a little strong. But it is obvious for what reason. For 5 months of training, I reached a maximum in the stanza 150 kg (100 kg working weight) and 100 kg maximum in a squat (on the shoulders). Working weight in a squat – 80-90 kilograms. Front squat 80 pounds. In the snatch barbell, the result is somewhere around 55 kilograms, and in the push – 65-70 kg.